It's that time again. Planning time! I love planning new cosplays. As you might have figured from my previous post, Calgary Expo is done for another year (controversy and all). Which unfortunately for me means no more big expos for a few months, until September which brings Saskatoon Expo (maybe for me) and Edmonton Expo. There's a couple local anime conventions (I don't watch much anime and feel ancient at those things) and a local horror con (maybe), but nothing major for the whole summer!

So my Poison Ivy costume didn't make it to Calgary Expo, but there's actually not too much to do to fix it. I just need to buy a new bra and rip out the elastic on the neckline and resew it in with a bit more stretch to solve the gaping issues I was having. Really, I could do it in an afternoon if I got to work.
Which means it's time to plan some new costumes! I think the costume I want to do the most is to crossplay Jafar from Disney's Aladdin. It will mark my first time crossplaying, but Jafar is one of my favourite villains from one of my favourite movies, so I'm pretty excited to try to pull this off. I get to get a little crazy with his exaggerated shoulders, Probably the toughest thing will be making his snake staff, then getting his goatee right. And finding an Iago plush on ebay that isn't either super ugly or super expensive.
The next costume I want to do is from a comic that I've been really enjoying: Rat Queens! I really like this series so far and have my pre-order in for the second trade. I'm planning to put together a Hannah costume. It should go together without too much difficulty (famous last words), consisting of a skirt, top, jacket and boots, plus styled wig and elf ears. Probably a less recognizable character, but that's ok. We'll see how many Rat Queens fans I can find.

The last thing I am considering is if I want to try to go to Calgary Horror Con and make a costume for the contest. I've been trying to think of a horror costume I'd want to do. The other day I had the idea of doing the Woman in Black. Mostly because I think that most of the historical pieces I would make could be used later for general historical costuming, which I'm also interested in. But that con is in mid June, with gives me just over a month and a half to put together a full Victorian gown and I'm not sure I can do that, since spring/summer are so much busier for me. I'm still looking for more good quality stills of the costume.

I'd love to hear any thoughts or comments or ideas!
Posted by mars2mercury at 07:56 2 comments:

Email ThisBlogThis!Share to TwitterShare to FacebookShare to Pinterest
Labels: Cosplay 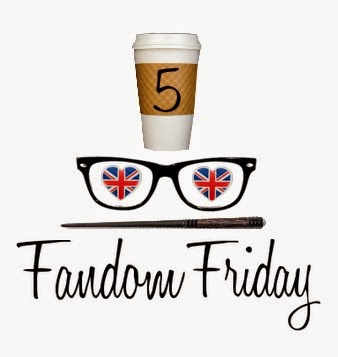 5 Fandom Friday is a weekly post hosted by The Nerdy Girlie and Super Space Chick. This week's topic is games I love to play.

1. Skyrim - This is my all time favourite video game. I love the world of Elder Scrolls and I love the gameplay and the sandboxiness of being able to run around and do whatever you want rather than follow a strict progression.

2. Ticket to Ride - Probably my favourite board game. I like that it involves thinking ahead and problem solving, but also gives you the ability to screw over your friends at the same time. Plus I'm fairly good at this game and so always have a chance at actually winning.


3. Balderdash - For when you just want to have some fun and some laughs. I like this game because it always makes me laugh and also is very inclusive, since you don't need to be a serious board gamer to play and enjoy it.
4. Lords of Waterdeep - This game is based on Dungeons and Dragons and it basically involves becoming the most powerful person in the city of Waterdeep. It has quite a few rules and mechanics, but once you figure those out, it is a lot of fun!


5. This War of Mine - This the newest game I've been playing and it is great. For anyone who doesn't know it, you play as civilians in a war and you have to upgrade the abandoned house you live in by day and scavenge for supplies by night. It reminds me of a very dark version of The Sims. But I also love the social message behind this game. It's a very different look at war than any other game I've played. Most war games let you play as a soldier and it also sort of glamorizes combat and death. In This War of Mine, when one of my characters died the other day. I honestly felt sick to my stomach. Very different sort of view of war.
Posted by mars2mercury at 06:51 4 comments:

Email ThisBlogThis!Share to TwitterShare to FacebookShare to Pinterest
Labels: 5 Fandom Friday, Balderdash, Lords of Waterdeep, Skyrim, This War of Mine, Ticket to Ride

Another year of Calgary Expo has come and gone and, as always, I had a blast! This year was the 10th anniversary and had record-breaking attendance of 102,000 people, likely due to the addition of a Thursday night show. While two of their biggest guests had to cancel (Norman Reedus and Stan Lee), there were still tons of awesome media guests including: Neil Patrick Harris, Rosario Dawson, Jason Mamoa, Jewel Staite, Stephen Amell, Hayley Atwell, Gwendoline Christie and more! So there was tons to see, especially if your a fan of comic book tv shows, with Arrow (Stephen Amell, David Ramsey), The Flash (Robbie Amell), Agent Carter (Hayley Atwell) and Agents of Shield (Ming-Na Wen and Brett Dalton) all represented. I was most excited to see Jewel Staite (Kaylee from Firefly) and Gwendoline Christie (Brienne from Game of Thrones). I got a photo with Jewel (which I will share as soon as I get it scanned) and watched Gwendoline's panel, which was awesome, since she is lovely and super funny as well!

As far as costumes, I wore my Belle costume for this first time on Saturday and it was great. I only ended up taking one photo with an Ariel I found who was adorable. I liked this costume because it's recognizable (mostly except for the boys my friend overheard who decided I was Alice in Wonderland). On Sunday I was planning to debut my Poison Ivy costume, but ended up having costume issues that I thought I could solve with double-sided tape, but ended up deciding it needed more work before I was ready to wear it around a con. So on Sunday I actually ended up just going in regular clothes.


I got to meet up with a couple of my friends from another city who I don't see very often, so that was really nice. However, hanging out with them made me realized that different people attend cons in different ways. The specific example is that I love going to panels and listening to my favourite guest talk about their work and walking around shopping and checking out the amazing cosplays and I also limit myself one  photo (they are so expensive!). My friends love getting photos and autographs and spend a lot of time in line for those and don't go to any panels. Neither way is right or wrong, I was just struck by the difference. My boyfriend also came for the afternoon of Saturday and wandered the floor with me before going to watch the costume contest, which was awesome, as usual and was judged by some big name cosplayers: Yaya Han, Jessica Nigri, Ivy Doomkitty and Okageo.

As usual, I ended up going some shopping and bough some awesome stuff that I will showcase in a later post. But the number of vendors at Calgary Expo is just insane. This year, I realized there was a whole 'nother area of vendors I didn't even know existed in the upper level of the Big 4 building. There I saw Yaya Han, which was pretty cool. She seemed pretty nice, taking selfies with people at her booth, but I was nervous to talk to her and felt bad because I wasn't in a costume on Sunday so I didn't ask for one.

I also went to some interesting cosplay panels on Sunday about prop and armour making, featuring some pretty amazing cosplayers like Okageo. I actually took notes and learned a lot about different types of materials like EVA foam, L200 and Worbla and about the importance of a really good paint job!

Today is Wednesday. I'm planning to wear this costume on Saturday at Calgary Expo (so excited). This is definitely a bit more last minute than I like to work, because, as you can see, it's still needs sleeves. They are cut out and the cuffs are interfaced and all that remains is to sew them together and onto the shirt. I plan to dedicate tonight to sewing, so fingers crossed I can finish this up tonight. Then just last minute tests and touches for my 2 Expo costumes, then EXPO TIME! Can you tell I'm excited?!?! 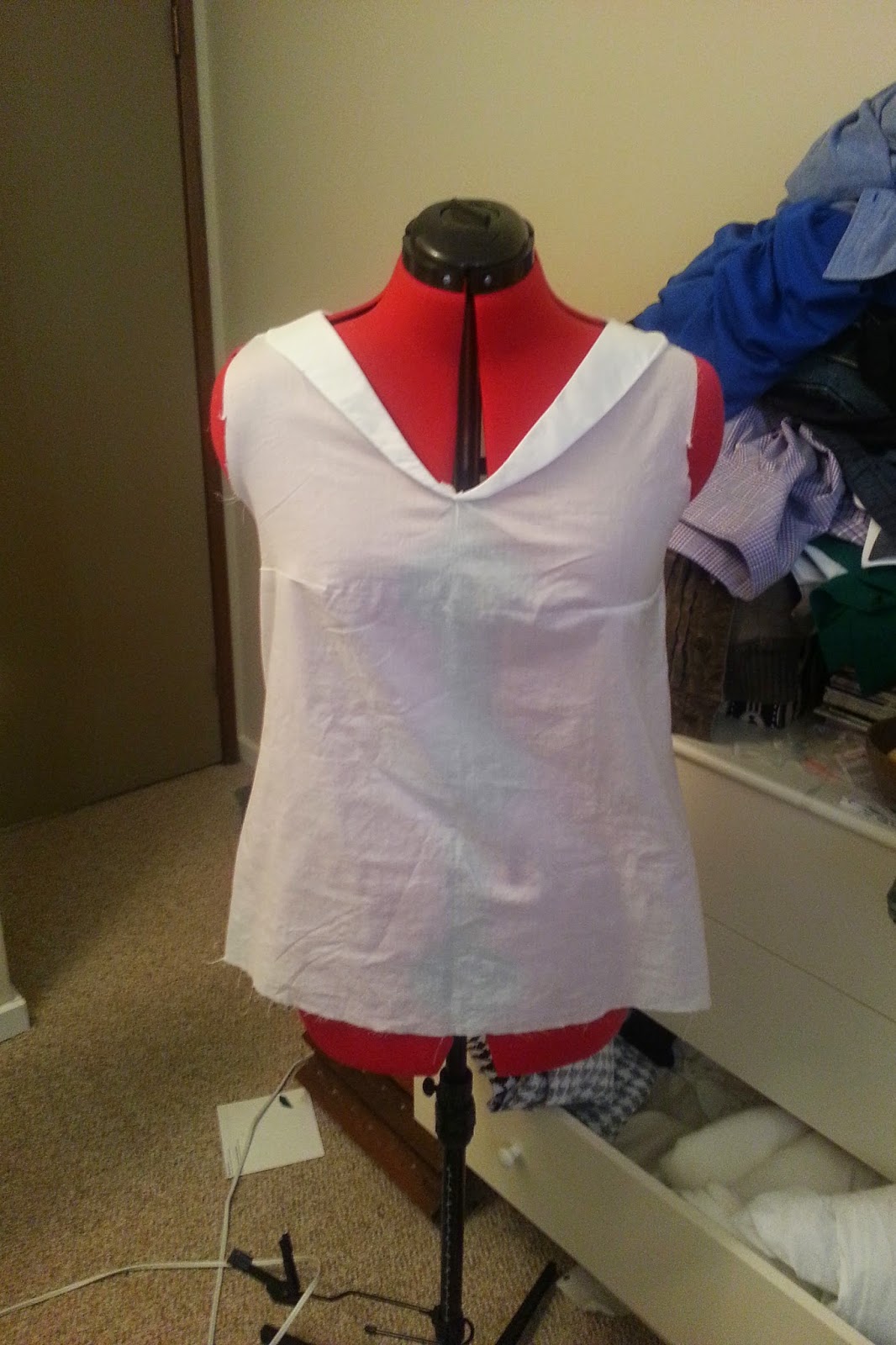 Posted by mars2mercury at 07:23 No comments:

5 Fandom Friday: 5 Magical Items I Would Love to Own

5 Fandom Friday is a weekly post hosted by The Nerdy Girlie and Super Space Chick. This week's topic is 5 magical Items I would love to own. Umm, can I have all of them?

1. Magic Wand - This one is pretty obvious. I need it to cast my spells and charms.
2. Bag of Holding - I'm a bit of a packrat, so having a bag I can fit everything I will ever need into sounds awesome.
3. Time-turner - Sometimes you just need more hours in a day.

4. Crup -  If I'm living in a magic world. I need a magic pet to keep me company.
5. TARDIS - I want to go everywhere and see everything and what better way than in the TARDIS. And I'm not complaining if the Doctor comes with it! ;)

I'm back and starting to stress

Sorry for the mini break! I need some time away from the computer etc.

Anyway, I'm back and Calgary Expo is only a week and half away! I still have so much to do! Here's where I'm at:


Belle:
Because both are new costumes, I'll also need to do a test run to make sure everything looks ok.

I also need to decide which to wear Saturday and which to wear Sunday. I'm planning to do a photo op with Jewel Staite (Kaylee from Firefly) and she's not there Sunday, so Saturday it will have to be so I'm trying to decide which costume will be easier to tone down for the photo. I'm also crossing my fingers that I can be near the front of the line so I can still make it to the costume contest afterwards. I'm leaning towards Belle, since there's no wig involved, so if I take off the hair bow and throw on a t-shirt, it should work. However, that also means I'll be doing Poison Ivy, which is definitely a bit more revealing, on Sunday without my boyfriend. It should be fine, since I'm planning to meet up with some friends hopefully. Plus it will just push me to be more confident.
Posted by Megan R at 08:07 No comments: