So, another two months have passed since my last post. Oops. Well, here's an update.

I didn't do ANY cosplay stuff from Edmonton Expo until last week. Can we say I was resting? More on my newest project in a sew.

There was Christmas, which always means board (and card) games in my family, which included Ticket to Ride, Clue with my nieces and Wits and Wagers. My boyfriend received Stratego for Christmas from a friend, which we haven't tried yet. I did get to try one new game recently, which is super fun and that was Roll for the Galaxy (link goes to Boardgame Geek). Seriously, so much fun. Try it if you can!

On the video game front, I've played some Fallout 4, Heartstone and did a bit on the new Diablo season that just started, but mostly I've fallen into an bit of an obsession with Assassin's Creed: Syndicate. I really love Evie's character because she is a capable female assassin instead of being eyecandy or an accessory. Her and Jacob are equals (although the game cover would suggest otherwise, which is annoying).

And that leads me to my decision on my latest cosplay project: Evie Frye. There's a lot of work to be done on her outfit alone, not to mention if I want to do any of her weapons. But I'm not going to rush myself and just go at the speed that my work ethic and budget allow..

Anyway, sorry for the long delay between posts. Now that I have my cosplay mojo back, I *should* be a more active blogger.
Posted by mars2mercury at 14:45 1 comment:

Oops, kind of disappeared there for a couple months. I blame it on pre-con craziness, followed by post-con laziness. I haven't even started another cosplay! But the BF and I did buy Fallout 4 this week (so expensive!), so I've been enjoying that lately! And playing Hearthstone still.

When I last posted, I was in the midst of struggling to finish up my Jafar costume in time for Edmonton Expo. I did finish it and I loved it. So many people stopped me for photos when I wore it. I did chicken out from doing the costume contest, mainly because I wasn't 100% happy with the way my staff turned out (the snake's eyes are too tiny). But here's a photo from a kind photographer Ion Photos, since the BF still hasn't downloaded the one he took of me, with a pose I like better. But I think my contouring makeup looks pretty good for the first time trying it (beside makeup test the night before). And I had a beard!

Anyways, not a lot else to report. I'm going to try to post a bit more regularly coming up though!
Posted by mars2mercury at 22:03 No comments: 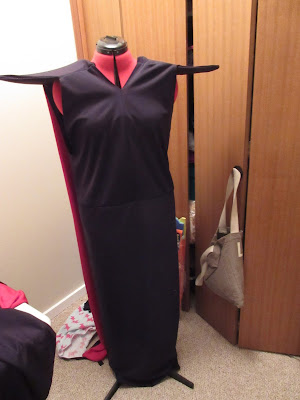 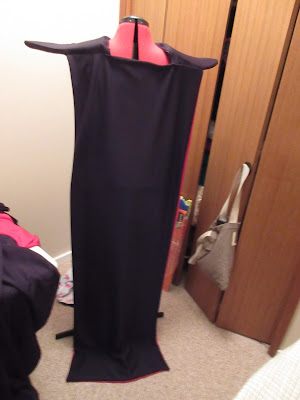 My fabric finally arrived this week! However, I had company come this week, which ate into my construction time a lot. Like 4 days without sewing. :(

But I have almost completed the main robe. I was hoping to get it done over the weekend, but I didn't quite get that far. I just need to add the belt and then this piece will be done.

I notice it's looking very black right now, but once I add the belt and the sleeves of the undershirt, there should be a lot more contrast.
Posted by mars2mercury at 20:30 1 comment:

Sunday Afternoon Tea is a new feature I'm bringing it where I basically chat with you readers about my week. What I've been up to, what I've been reading, what I've been playing, my favourite things around the internet that week and so in. So here's my first try at it!

COSPLAY CONSTRUCTION (again). Well, it actually had to be paused because I had company Thursday-Saturday, then more Saturday night to this morning. Which means that my sewing room gets converting into a guest bedroom and is unavailable. But pretty much immediately after our guests left this morning, I had it converted back.

Plus my fabric from Joann's FINALLY arrived. I ordered it on August 20 and it didn't arrive until September 2. Not that I could get it until September 3 because they tried to deliver while I was at work and then would not let me pick it up until the day after. Which was the day my company was arriving, so no sewing room anyway (grumble).

I'm still reading You've Never Weird on the Internet (almost) by Felicia Day. I also got a couple books on millinery from the library.

Heathstone. I just started playing ranked on my warlock. Also, I'm planning to try Might & Magic Heroes Online, since Heroes 3 is my favourite game ever and my cousin (who introduced me to Heroes 3 in the first place when we were kids) recommended this browser-based game.
Posted by mars2mercury at 11:44 No comments:

So I am STILL waiting for my fabric to arrive that I ordered from Joann's. Well, I think they tried to deliver today while I was at work, so I have to wait until tomorrow to pick it up at the post office (stupid having a job).

I have gotten a fair bit of work done on my staff though. Last night I put on the 1st layer of paper mache. However, I have company coming, which means the sewing room is transformed into a guest room, so no work tonight (cleaning), Thursday or Friday. Hoping to get the sewing room put back together by Saturday and do a lot over the long weekend.

Here's the staff so far. It's a bit hard to tell what;s going on with all the colours from the grocery flyer I used for the paper Mache. 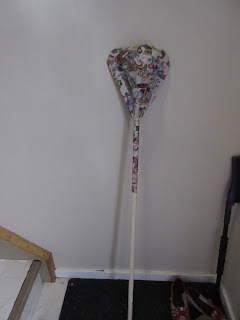 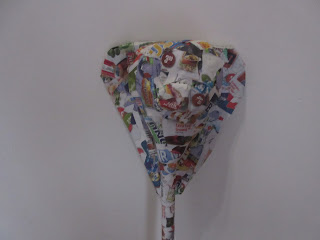 Posted by mars2mercury at 16:38 No comments:

This fall film challenge was created by Jen from quirky pickings (her post is here). I think I signed up for this challenge last year, then proceeded to watch exactly zero of the films (and basically stopped blogging, but let's not talk about that).

Basically, the challenge starts tomorrow, September 1 and runs until November 30. All films must be previously unseen and have been shown in a theater. If you want to join in, got to this Facebook group!

one. any set in new york city. Wolf of Wallstreet
two. any incorporating hot air balloons in the story. Up
three. any featuring a child as the main character. The Goonies
four. any disney film. Frozen
five. any set in egypt OR that has an egyptian character OR that stars an egyptian actor/actress. Prince of Egypt
six. a close friend or family member's favorite film. Skyfall
seven. any with the word great in the title. The Great Gatsby
eight. any starring harrison ford. Hollywood Homicide
nine. any featuring an idiot as the main character. Our Idiot Brother
ten. any mentioned in levis strauss' list: denim in the oscars: a look at jeans in cinema. Brokeback Mountain
eleven. a film about a knight. Braveheart
twelve. a love story. Pretty Woman
thirteen. a movie about something miraculous. Soul Surfer
fourteen. any starring an actor/actress with the same first name as yours. Teenage Mutant Ninja Turtles
fifteen. a film about the olympics. Foxcatcher
sixteen. a film on time magazine's list: the top ten newspaper movies. His Girl Friday
seventeen. any with a question in the title. Who's Counting?
eighteen. any with a score of ninety percent or greater on rotten tomatoes. The Avengers
nineteen. a film about a superhero. X-men: Days of Future Past
twenty. any with subtitles. The Lunchbox
twenty-one. any incorporating unicorns in the story. Blade Runner
twenty-two. a film about a personal victory. Pitch Perfect
twenty-three. a film with black or white in the title. Men In Black III
twenty-four. any set in a country you would most like to visit. The Best Offer
twenty-five. a film set in a zoo. Zookeeper

I feel like this list is so much more cultured than I am!
Posted by mars2mercury at 21:47 8 comments:

Sunday Afternoon Tea is a new feature I'm bringing it where I basically chat with you readers about my week. What I've been up to, what I've been reading, what I've been playing, my favourite things around the internet that week and so in. So here's my first try at it!

COSPLAY CONSTRUCTION! I have less than 1 month until my first cosplay competition and I have so much left to do. You can check out my most recent WIP Wednesday here.

Also, I went to Hot Topic for the first time. It just opened in my city a few months ago, but that mall is kind of fall, but I made the trek on Saturday. So much fangirl stuff. I honestly just stared at the t-shirt wall for 10 minutes! Plus they have some coupons/rewards that can result in some decent deals (since I'm not a big fan of paying full price if I can help it). I got a couple geeky t-shirts, but will be going back for some Funko Pops next month using the coupon I got today.

I'm currently reading Felicia Day's memoir You're Never Weird on the Internet (Almost). Basically I've learned she is amazing and very smart. I'm also trying to finish The Unbecoming of Mara Dyer by Michelle Hodkins, which has taken me ages because I found it really boring up until the final 100 pages or so. I think I have 50 left to go.

I tried Hearthstone a few months ago and didn't like it. I found it really hard to get started because everyone has such better cards than me, so was constantly losing, which wasn't fun! Anyway, once I figured out how to play the warlock and got leveled up a bit, I know enjoy it way more and have been playing that a lot lately. I also made a Season 4 Diablo 3 character, but haven't done much leveling there.
Posted by mars2mercury at 01:00 No comments: